Children dismantle a vehicle belonging to the United Nations Organization Stabilization Mission in the Democratic Republic of the Congo (MONUSCO) in KAN-YARU-CHINYA
Protesters set fire on UN vehicles in Goma while protesting against the presence of the United Nations Mission in the Democratic Republic of Congo (MONUSCO).
The blazes started after rumours about the UN allegedly transporting rebels from the M23 group had spread among displaced people and residents in the city.
Earlier MONUSCO announced a “strategic and tactical withdrawal” from embattled Rumangabo, where the M23 is trying to advance.
The mission posted on Twitter that the decision was taken “in consultation with our partners, to better prepare the next steps together.”
It added that “MONUSCO remains mobilized alongside the FARDC (DRC Armed Forces).”

⚡️”The whole world is helping the Luhansk region: the Foreign Legion has entered Severodonetsk. The fighting for the city continues”, – Serhii Haidai, the head of the Luhansk Regional Military 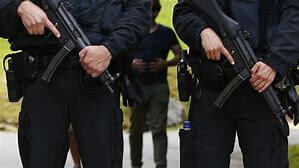 What is Emergency Security Guard Services and who needs it and how does it work? We will discuss these questions and explain how IronMike Solutions works with clients to provide